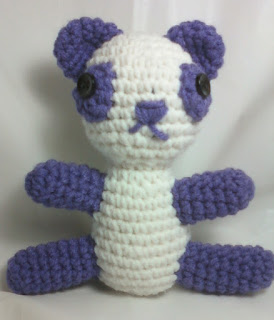 My niece and nephew happened to be at my house when I was working on the amigurumi frog that's for sale in my Etsy shop and of course both asked me to make them a stuffed animal for their birthday.  My niece asked for a panda and my nephew asked for a lion. (I'll be posting the lion as soon as it's finished.)  So here is the finished panda.  She LOVES it!

You can find the pattern for this adorable panda at Darncat Crochet here.  I pretty much followed the pattern but made a few changes for this one as follows:

I used Red Heart Super Saver yarn in white and lavender.  Since I was out of safety eyes I used buttons for the eyes.  I also crocheted each part as a spiral and skipped the step of joining at the end of each round.  That way there isn't a seam running down the back.  The pattern says to make the head and body separately and sew them together, but I just took out a row at the neck and made them in one piece to avoid having to do another seam.  (That's my least favorite part about making these - can you tell? lol )  I also made the arms and legs each a row shorter than the pattern calls for and attached them as shown so the panda is sitting instead of standing.  So have fun with this and modify it as necessary to fit your needs.  Happy crafting!
Posted by Kari Davies at 7:46 AM