How To Read An Overlay Mosaic Chart or Graph 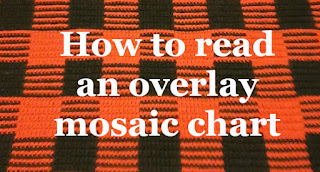 Each pattern designer writes their charts a little differently, but most follow these basic concepts. You'll always want to read the designer's notes and stitch definitions. These will normally define what each of the symbols and/or colors on the chart mean and how to work them. 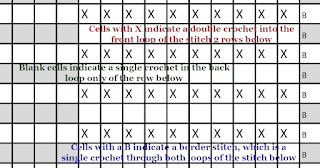 Here is an example of part of a mosaic crochet chart. Some designers mark them differently, but generally an X in a cell, whether or not it's shaded, means you will work a double crochet into the front loop of the stitch two rows below in the row color. You'll be skipping the stitch from the previous row, which ends up covering up the stitch in the previous row. 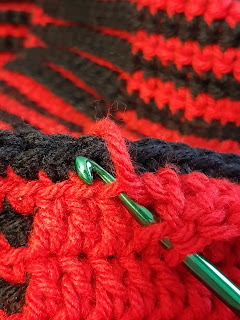 Generally if a cell is blank in the chart, regardless of whether or not it's shaded, you'll work a single crochet into the back loop only of the stitch in the previous row, working in the current row color. 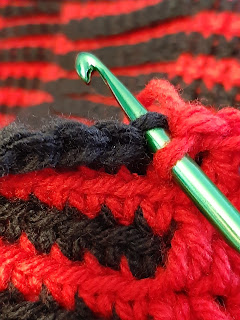 You'll be working one color at a time. The cells with the row numbers will usually be shaded for color A or B. Work the entire row with that color. Some cells in the chart in a particular row may be shaded a  different color, but that's only to show what the pattern looks like.
Some charts will have a B to indicate the border single crochet stitches, some will have SC, and some will have other markings. Again you'll need to look at the stitch definition for your current pattern. However it's indicated on the chart, you'll work a single crochet into both loops of the stitch in the previous row.
These are the main symbols you'll encounter on an overlay mosaic crochet chart. In addition you may see indications for a chain stitch. When I started mosaic crochet I worked my double border aka envelope border with a slip stitch as I had been taught. I've since found a different method of working the border that uses a border stitch and a chain instead, so you'll see an "o" on many of my graphs that will indicate a chain stitch on each side of the rows. I'll cover that more in-depth in the post about border methods.